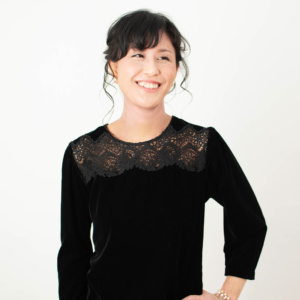 Pianist Emiko Sato is a sought-after solo and chamber musician both in the U.S. and in Japan.

Emiko’s debut album, Romantic Moment, represents a culmination of work on Romanticism that occurred during the years between 2001 and 2015, when Emiko was studying in the United States at the Mannes College of Music and the Graduate Center, City University of New York, obtaining the Master of Music degree, Professional Studies Diploma, and the Doctorate of Musical Arts.

Her work was also encapsulated in a more tangible form in her solo recitals between 2003-2012 in NYC and her dissertation, “The Finales of Robert Schumann’s Piano Sonatas and Fantasy.”  Her research sparked ways in which formal and harmonic analysis can benefit a performer in terms of conceptualizing time, understanding story-telling, and creating psychological effects in performance. The dissertation was nominated for the Barry Brook Dissertation Award 2015.

The same year, Emiko was awarded a grant from the Music Society of the Doshisha Women’s College of Liberal Arts, her alma mater in Japan, which led to her debut recital in Arukas Hall, Osaka. The recital was titled “A Romantic Evening–What is Romantic?” featuring her favorite works by Romantic Composers including Rachmaninoff, Chopin, and Schumann.

During her years in NYC, Emiko has served as a member of the adjunct music faculty at the Aaron Copland School of Music, Queens College, City University of New York, and in 2010, she served both as music director and pianist for a summer music festival, “The Designing Dichterliebe: Celebrating Chamber Works by Robert Schumann,” celebrating Schumann’s 200-year anniversary.

She has also actively performed in the fundraising concerts to support victims of Tohoku Earthquake and Tsunami (New York, 2011), Ukrainian Conflict (Chicago, 2015) . After returning to Japan, she has also performed in the fundraising concert for the victims of Tohoku Earthquake and Tsunami held in Kyoto (December 2015), which was produced by a Japanese Composer Noriko Nakamura.

In addition to her main study on Romanticism in Classical Music, her 14 years of studying and living experience in NY encouraged her to promote the understanding of the cross-cultural influence on music, and to promote international friendship through music. In October 2016 she was featured in the interview article “My 24 hours” of Sankei Newspaper, in which she shared her studying experience in New York City. (For English Translation, please visit the Press page.)

For this, Emiko was invited to perform several times for the international friendship receptions at the House of Consul General of America in Kobe. At the Musikfest Nara 2016, she appeared as a member of a crossover ensemble “NICE-TO MeeTrio” where she presented works by American composers, introducing the immigrant composers, who contributed the crossover in music.

While being an avid chamber musician, Emiko’s debut as a producer in the Romantic Moment opened a new door for working with artists of other fields, an idea which originally derived from her longtime enthusiasm for film.

Emiko is deeply grateful for these awards and scholarships which made it possible to pursue her studies: the Matsushita Kimiko Scholarship, the Ishimura Masako Award, and the Niijima Award in her native Japan as well as the Mannes Merit Scholarship in the United States.

To find out more about Emiko’s project please visit the Schedule and Projects pages!