Now on sale at Amazon Japan 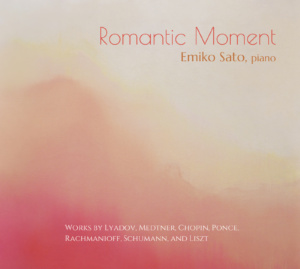 “To a romantic, a cloudy sky is more than a natural phenomenon; it is an expression of …… ”

(From the liner notes of the Romantic Moment)

Emiko ’s debut album, Romantic Moment, features works by composer-pianists of the 19th-20th century who crystallized their irreconcilable feelings of joy, anger, regret, and despair through music. Emiko retraces their longing and hope through the alluring sound of a Steinway piano.

The artwork of the jacket was created by German painter Sonja Kanno. The painting, Zeitgeist (2019), was inspired by the soundscape of the album. The music and the art share the concept of the passage of time, humanization of natural phenomena, and the Japanese concept of En [縁: connection, bonds, destiny], which creates a connection between the end and the beginning like a loop.

The recording, by director & co-producer Kohei Seguchi who extensively works both in Europe and Japan with many distinguished artists, truthfully captures the colorful and dynamic piano sound and the sonorous acoustics of the Gulliver Concert Hall in Shiga, Japan.

Check out Emiko’s Instagram Page @emikosatopiano to find out about the backstories/related topics of the CD production! 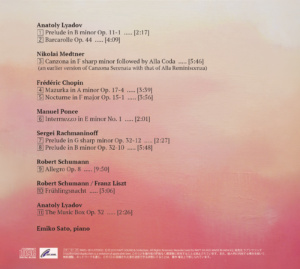 (an earlier version of Canzona Serenata with that of Alla Reminiscenza)

⑥ Intermezzo in E minor No. 1